Jana Mayfield is a main character in Season 1 of Containment.

Jana is Lex Carnahan's girlfriend who works as a Data Recovery Specialist at Bitscan. She grew up in group homes with her best friend Suzy who she now works with. She has emotional baggage and struggles with commitment issues: there has been two failed attempts of her moving in with Lex even though they have been together for 3 years.

When the outbreak hits, Jana finds herself trapped inside an office high-rise in downtown Atlanta. She is extremely intelligent and manages to avoid infection. Jana takes on a leadership role inside the cordon area, enforcing protocols and attempting to prevent fatalities.

Jana was previously in a relationship with Jake Riley, however she broke it off due to Jake's personal issues.

Jana is packing boxes when her boyfriend Lex Carnahan arrives at her apartment. Jana appears anxious and Lex realises she is having doubts about moving in with him. She assures Lex it's nothing, just a moment of doubt, but Lex's temper gets the best of him and he storms out.

Later that day, Jana heads to work at Bitscan Data Recovery where she bumps into her best friend Suzy. Suzy questions Jana about the move before realising Jana didn't go ahead with it. Suzy explains to Jana that unlike Jake, who had issues, Lex is a good one and she needs to realise that before he leaves her. Taking Suzy's advice, Jana finally decides to answer his call. He warns her about the possible flu outbreak and she tells Lex that she's ready to go through with the move.

Later she doesn't get Lex's newest message advising her to go directly to his place instead of going back to hers, so that she would be safe.

That evening, when Jana attempts to leave work, she finds herself trapped inside the Cordon.

I To Die, You To Live

She goes back to Bitscan for the night and calls Lex to ask what's going on. She decides to stay in the clean room. Later she sees there is barely any food in the fridge. She is surprised by Dennis and Suzy and lets them in.

In the morning, the lack of food in the fridge reminds her and Suzy of their childhood in group homes. Jana proceeds to divide the food into three portions, even though she makes it clear to both Dennis and Suzy that she is strongly disapproves of their affair. They have to divide it again when Tony arrives.

Later, in the sanitized room, she calls Lex to share her concerns, and her feeling of guilt about having hesitated to move in before.

In the evening, she goes into the clean room with Suzy, playing a game in which they ask each other what their birth mother is doing. They then hear a very loud noise, which is the sound of containers being set up.

Be Angry at the Sun

She is mad at Lex for not telling her about the shipping containers but realizes he couldn't.

At Bitscan she serves lunch to Suzy, Dennis and Tony who protest because there is barely anything to eat; she explains that Lex said it might last a while so they need to hunker down. She is against Dennis's idea of a food run but loses the vote.

She watches intheperimeter.com's latest video with Suzy, realizing how bad things are, when Tony and Dennis return from the food run. She gets suspicious when she sees that Dennis is sweating and not wearing his gloves; she then decides to put both of them in quarantine, to which Suzy reluctantly agrees.

She is on the phone with Lex when the line cuts.

With Silence and Tears

When seeing Lex's TV intervention, she realizes he is lying and decides to build a phone with the power to call outside the dead zone, hoping that he will tell them how to survive.

She realizes she needs a signal booster, more precisely a directional signal with the power to reach a working cell tower. Dennis then asks if he and Tony could make the first phone call; he also tells her that no one is better at microelectronics than her.

She then gets on the roof through the fire door, and starts unscrewing a dish when Sam surprises her; she is scared until he shows his face and she realizes she knows him. He asks if they have room for him and Jana says the others would refuse.

After she successfully builds the phone and Suzy has found signal, Dennis asks to get the first call but Suzy stands up to him. Jana leaves Lex a message before succeeding to join him but the line cuts before he can say much.

Later she is seen watching the window with Suzy, waiting for the drone. It is likely that the message Leo asked Xander to deliver was to tell Jana that Lex would be watching the drone footage. When it arrives, Lex sees Jana holding an "I love you Lex" sign.

On day 7, she and Suzy notice on the surveillance footage that there are many squatters in the garage, when they see Lommers on TV announcing the food drop. Dennis and Tony say they went out for the last food run so it is Jana and Suzy's turn. Jana then decides to go alone.

Jana goes outside for the first time in a week; she notices all the crosses. She sees Trey and his gang's truck stop; Trey blow a kiss at her before restarting the truck. Jana notices Xander in the back of the truck. She later sees Jake at the food drop; he gives her Lex's key and he tells him about Katie and Quentin, and gives her a box of MREs.

She then tries to cross the garage without getting noticed by the squatters. However one of them sees her and try to take her box; she hits him, runs to the elevator and types the code. However the gang rounds up around her as she waits for the elevator. Sam then hits some of them with a pipe and gets in the elevator with her. She later tries to convince Dennis and Tony to let Sam in after her quarantine because he saved both her life and their food, but they refuse.

He Stilled The Rising Tumult

She and Sam decide to go to the utility room to fix the A/C problem. On the first floor, they see that the corridor is very messy, and assume it is the guys in the garage. They find food and also a murdered man.

They get to the utility room, where Sam takes longer than she expected. He and Jana start talking about the dead man, Chuck, and she opens up about her communication problems. Then Sam fixes the A/C.

They get back to Bitscans when Tony shows them that Teresa and Xander are "on their doorstep"; Jana recognizes Xander and tells Tony to let them up. When he refuses she makes the elevator go down herself. Later, she offers to help Teresa fold baby clothes. She is as surprised at Teresa when she pulls Meese's phone out of her plastic bag. When Tony shows them the surveillance footage, she is shocked when seeing one of Trey's men point a gun at Leanne.

Jana is tall and slender with long, dark curly hair. She has an olive complexion and dark eyes. 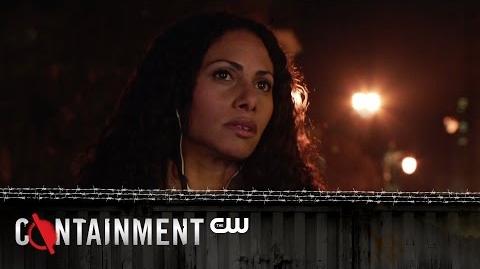 Retrieved from "https://containment.fandom.com/wiki/Jana_Mayfield?oldid=7125"
Community content is available under CC-BY-SA unless otherwise noted.